The Water Art of Wismar 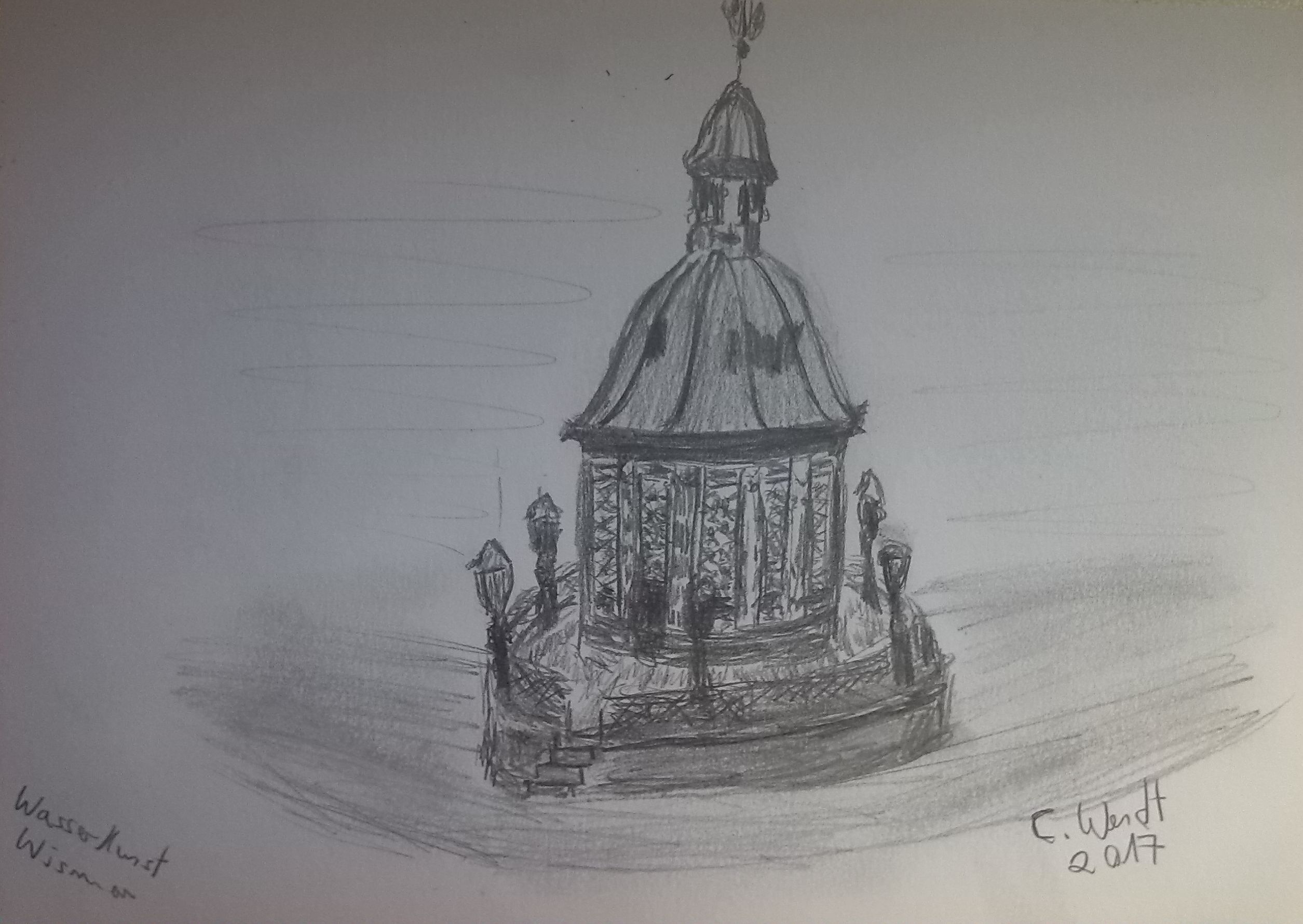 The Water Art of Wismar

It took some time, but finally my first article for my Wismarblog is ready! I will post more pictures soon. Enjoy yourself while reading!

The most beautiful sight and at the same time the landmark of Wismar is the water art. It stands on the market square, one of the largest in Germany, with 10,000 m². It was built according to the plans of the Utrecht master builder Philipp Brandin.

The term “water art” refers to a medieval scoop and pumping station, which was used to secure the water supply of the city, by promoting, raising and guiding water.

The art master was responsible for the water art.

What were the tasks of the water art?

Where a small well sufficed before, a larger one had to produce with growing population number. The water art, built in 1602, was the central water reservoir of Wismar until 1897, and served the city supply, with fresh water.

220 houses and 16 public places were supplied by it with water.

The art of water functioned as a central distribution point, in which the wooden piping system of water merged.

How does the water supply work?

In the first centuries after founding the town, the inhabitants of Wismar supplied themselves with drinking water from simple wells.

From about 1430, water carriers and drivers were deployed, who delivered water when required.

In the 16th century, the task of the Wismar city fathers was to secure the city’s water supply.

This includes not only the supply of drinking water, but also the provision of fire-fighting and operating water, irrigation of trenches, feeding of water mills and garden irrigation. The water requirements of residential and work places had to be covered.

As the population grew, the demand for fresh water rose grew too, which is why water storage, transport and distribution techniques were developed.

In 1897, the water art stopped with supplying the town with water.

Where does the water come from?

First the waterart was provided by the mill pond (Mühlenteich) of Wismar.

In 1570 the first water was conducted from the Metelsdorfer spring, south of Wismar. Through wooden pipes it flowed into a collecting basin, a wooden fountain in the Old Wismar Street (Altwismarstraße).

From 1602, the water art was served from the Metelsdorfer source.

With the construction of the new water tower, from 1682 the city was supplied by a water mixture of Mühlenteich and Metelsdorfer source.

Water art as a prestige object?

Water arts were built in the Middle Ages at central points of the cities. It was a pleasure for local authorities to place these as a prestige object on the spot. That is why they were designed specially artful. Some landlords saw this as an opportunity to set themselves a monument.

For the citizens were the well water suppliers and a communication center. There was the latest gossip. Whether from their own city or neighboring towns, one could hear and spread the news.

Then we go for

Controversial Water Art – For the benefit or the ornament

2 Replys to “The Water Art of Wismar”

This website uses cookies to improve your experience while you navigate through the website. Out of these, the cookies that are categorized as necessary are stored on your browser as they are essential for the working of basic functionalities of the website. We also use third-party cookies that help us analyze and understand how you use this website. These cookies will be stored in your browser only with your consent. You also have the option to opt-out of these cookies. But opting out of some of these cookies may affect your browsing experience.
Necessary immer aktiv
Necessary cookies are absolutely essential for the website to function properly. These cookies ensure basic functionalities and security features of the website, anonymously.
Functional
Functional cookies help to perform certain functionalities like sharing the content of the website on social media platforms, collect feedbacks, and other third-party features.
Performance
Performance cookies are used to understand and analyze the key performance indexes of the website which helps in delivering a better user experience for the visitors.
Analytics
Analytical cookies are used to understand how visitors interact with the website. These cookies help provide information on metrics the number of visitors, bounce rate, traffic source, etc.
Advertisement
Advertisement cookies are used to provide visitors with relevant ads and marketing campaigns. These cookies track visitors across websites and collect information to provide customized ads.
Others
Other uncategorized cookies are those that are being analyzed and have not been classified into a category as yet.
SPEICHERN & AKZEPTIEREN
Posting....
Close